Is Working In Tech Still Worth It?

2022 has been a rough year for many software developers.

After the mass hiring seen during the pandemic, companies suddenly realised that the rapid growth was an anomaly.

As the world returns to normal after an extended lockdown in many countries so are public spending habits. Reduced spending across the board has resulted in many companies having to lay off staff.

Unfortunately, this is likely to lead to a self-fulfilling loop as the recently unemployed aren’t likely to be spending a lot of money.

I have quite a few friends at various companies that have lost their jobs coming up to the holiday season many of which had only recently switched companies.

As many of you know I am riding out the storm by taking a creative sabbatical and I can imagine many of those recently laid off from Twitter are probably aren’t too keen to jump straight back into the job pool.

There is a great website called Layoffs.fyi that shows all the layoffs at the major tech companies.

You can see from the graph how bad things have got in recent months. The majority of the layoffs have been from major tech companies such as Meta, Amazon, Twitter, and Uber.

Given all these layoffs many people are wondering whether it is still worth getting into tech.

Even with the state of the job market I still believe the answer is a resounding “yes”.

Technology is only getting more advanced and being technologically literate is a requirement, not an option.

Over the last few decades, we have seen how the internet has changed everyone’s lives. Those that embraced it early and saw the potential have become ridiculously wealthy.

The Dawn of Artificial Intelligence

The number of AI startups is rapidly increasing and people are coming up with interesting ways to use artificial intelligence. I must admit the results are quite impressive.

There are AI writing apps such as jasper.ai and lex.page which help you write better content. The output of these apps is scarily good. As a result, we are either going to be drowned in a world of AI-generated content or everyone is going to have to up their game to be better than the robots.

Take this for example:

There are also many interesting projects being developed on the Ethereum blockchain. These are too numerous to list but include everything from DAOs to non-fungible tokens. The possibilities are endless and we are only just scratching the surface.

The above paragraph was written with lex.page AI generator. I could probably write a whole blog post (I am not going to) using AI and you wouldn’t notice.

It is not just writing that is being overtaken by AI. There is a lot of great work being done with images as well.

DALL-E generates images based on user input some of them are really impressive. This could be great for having unique images in blog posts.

If you are looking for a unique profile picture then ProfilePicture.Ai (affiliate link) takes a bunch of your photos and turns them into AI works of art. This is what it did with mine: 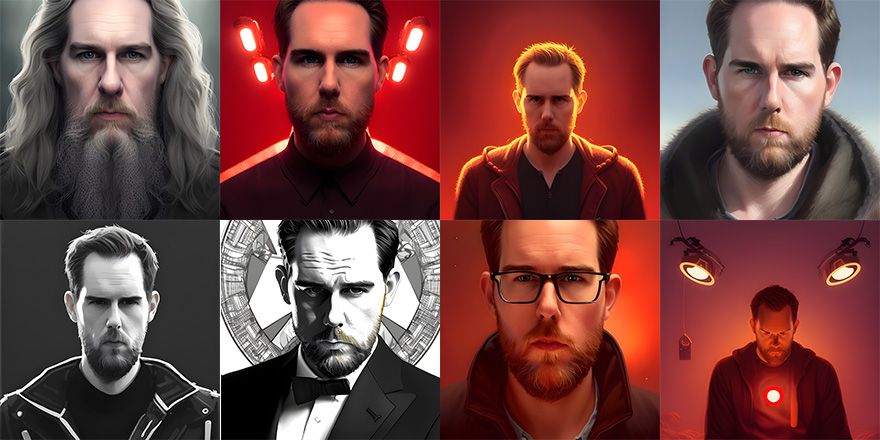 It is only a matter of time before AI replaces many jobs the same way robots did for factory workers. The only way to stop AI from taking away your livelihood is to be the one creating things with AI.

If you can’t beat them join them.

The other area where there is a lot of potential, is in the area of virtual reality. We are still a few years away from having affordable and good-quality VR headsets but when they become available there are going to be a lot of interesting applications.

I am not just talking about gaming here.

There are many areas where VR can be used such as education, training, and simulations.

There is a great part in the book Ready Player One that they missed out from the film. Wade goes to a school in the Oasis and has all his lessons virtually. One of his science lessons is taught on the surface of a planet.

I imagine kids would pay much more attention in biology cl ss if they could swim around the body as a blood vessel does. Wouldn’t Shakespeare be more interesting if experienced as a peasant would watching a play in the Globe Theatre?

There are still so many possibilities that are possible as technology advances and software developers are always going to be at the forefront of that.

So if you were thinking about getting into tech I would say go for it. It is a great career with a lot of potential.

🧑‍💻 Latest from me

🎬 YouTube - 11 Ways to Make Money as a Developer. One of the reasons why I recommend people learn to code is because there are so many ways to make money from it. In this video I cover the 11 different ways people can make money from their coding skills.

📝 Article - Git Flow vs GitHub Flow. Taking a look at the 2 main branching strategies used by developers and when to use them.

🎬 YouTube - Stack vs Heap Memory - Simple Explaination. Understanding the stack and the heap and where your variables are stored in memory can really improve your understanding in how your code is behaving.

📝 Article - Code Katas: Can They Make You A Better Developer? - They say practice makes perfect. I prefer practice makes improvement and one way to do that is by using code katas.

Want to add a comment? Comments can be added to the article on Substack.