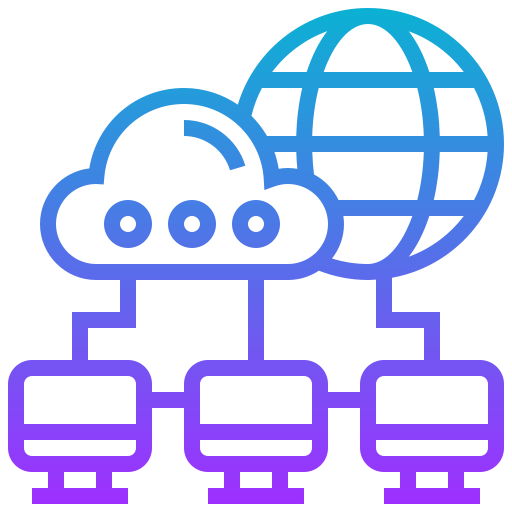 Recently I went through the process of setting up Drone CI on my Raspberry Pi. The plan was to use my Raspberry Pi as a build server for this website as well as other projects.

However, the Sharp image library that Gatsby uses to resize images doesn’t natively work on ARM processors. I did try to compile it in the docker image but I couldn’t get the correct version to be picked up when running the builds. On top of that the builds were incredibly slow on my already overworked Raspberry Pi 2B+.

So I started looking for x86 based single board computers (SBC) that would be able to run them. However, most of them aren’t that great and start at around £100, a bit more than a Raspberry Pi (the LattePanda looked quite good if you are interested).

At that price point, I might as well just run Drone CI on AWS in a micro EC2 (t2.micro £73 a year or free for first year).

Then I remembered, we have been using GitHub Actions at work and they are surprisingly good and cost effective. Really I am a bit late to the party with this!

If you have a public repository then you can run GitHub actions for free. Yes free!

Most of my code however is not public and for private repositories GitHub give you 2,000 minutes per month free (3,000 on a pro account). These builds also run with a generous 2 cores and 7 GB of RAM, a lot more than a t2.micro!

It takes around 2 - 3 minutes to build and deploy my blog to S3, so I am not likely to run out minutes each month with the frequency I post.

This is assuming your code runs on Linux which mine does. If you need to run on Windows then you only get 1,000 minutes a month. If for some reason you need your build to run on MacOS then that drops to 200 minutes.

Essentially at 2,000 minutes and $0.008 per minute on Linux, GitHub are giving us $16 dollars of runtime for free per month. As Windows and MacOS are more expensive to run you will use up your free credits quicker.

What can you do with GitHub Actions

With GitHub Actions you can pretty much do anything you would normally do on a build server.

On top of that it comes with tons of community made plugins as well.

So this blog is hosted on Amazon S3 with Cloudfront. At the moment, this website costs me around £0.50 a month to run, which I can’t complain about (I have shared my terraform build in a previous post if you are interested).

However, until now I have been pushing up changes to my S3 bucket locally from my machine (yuck).

My current build process consists of a few commands that are set up in my package.json file.

The above is assuming I have also run yarn install at some point in the past and I have credentials set up on my machine to allow me to upload to Amazon S3.

To be able to use GitHub actions you need to create a workflow file under .github/workflows in your project.

I am going to go through each of these steps so you know what they do.

This is my scripts section in my package.json file. I reference these in my workflow to keep things consistant.

Here we specify what operating system our workflow is going to run on. Here I am running on linux so I pick the ubuntu runner. You also have the option of Windows or MacOS:

You can find a list of runners in the GitHub Docs.

I have also specified a timeout of 10 minutes. It is good practise to set a timeout so that a malfunctioning workflow doesn’t eat up all your free minutes.

Define when to run this workflow

As it is only me contributing to this blog, I just have the workflow set to run when something is committed to the main branch. So if I merge a PR or commit straight to main it will kick off a build and deploy my blog.

You will definitely need this step, as it checks out you code into the runner.

As Gatsby relies on Node we need to set it up. I am using version 12 so I set that up here in the script.

As you may know most React applications end up with a huge number of packages in the node_modules folder. If you are starting from a fresh project, a considerable amount of time is taken up downloading these packages. This will impact your build times and therefore your free minutes on GitHub.

For Gatsby we also want to cache the .cache folder and public folder so we don’t have to rebuild these each time.

If I chose to build on Windows instead then it would create a new cache key. There are various methods you can use to create a cache key which you can find more about on the repository.

Caches are kept while they are in use but if not used in 7 days they are removed.

This installs all of the npm packages require by my website. As the node_modules folder is cached this will be quicker after the first run.

Check for any lint errors in my code before continuing. Lint is set up as script in my package.json file and is the equivalent to ./node_modules/.bin/eslint --ext .js,.jsx --ignore-pattern public .

Another script in my package.json equivalent to gatsby build.

To be able to push to AWS and invalidate the Cloudfront cache we need to provide access keys and specify the region. Access keys are added using GitHub secrets in your project. I will cover how to set these up in a bit.

Upload to S3 and Invalidate Cache

Finally we need to push the built files in the public directory up to S3 and invalidate the Cloudfront cache. I do this with another script set up in package.json file.

Which is the equivalent to running this:

In case you are wondering, the export AWS_PAGER=""; command is so that the AWS CLI doesn’t prompt you to press enter after the invalidation has been done. This was a breaking change that the AWS team introduced recently.

Ideally, you should create a user with just enough permissions to be able to perform what we need and no more.

To do this we need to create a new policy by logging on to AWS Console and going to IAM > Policies.

Then we need to create a policy with the following JSON, replacing yourdomain.com with the name of your S3 bucket for your website.

Once the policy is created you need to create a new user under IAM > Users. Give it a name such as githubuser and select programmatic access:

Next select “Attach existing policies directly” and pick the policy we created in the last step. 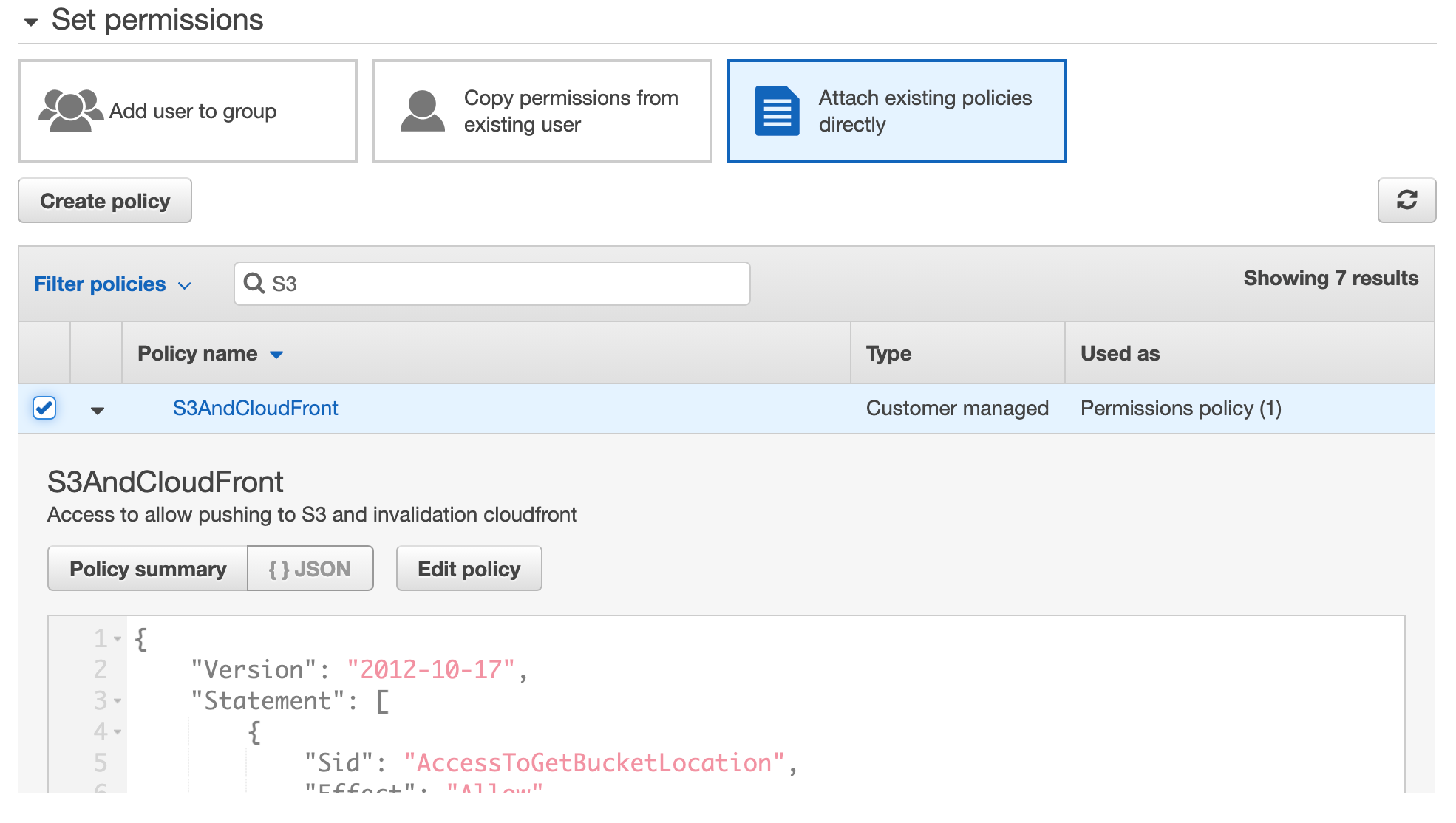 On the last page you will be given your Access Key Id and Secret. You will only be shown this secret once so make sure you copy it down.

Lastly we need to add these secrets to GitHub. On your repository go to Settings > Secrets from their you need to add “New repository secret” and add in AWS_ACCESS_KEY_ID and AWS_SECRET_ACCESS_KEY.

Now the next time you commit changes to your main branch it will kick off the build: 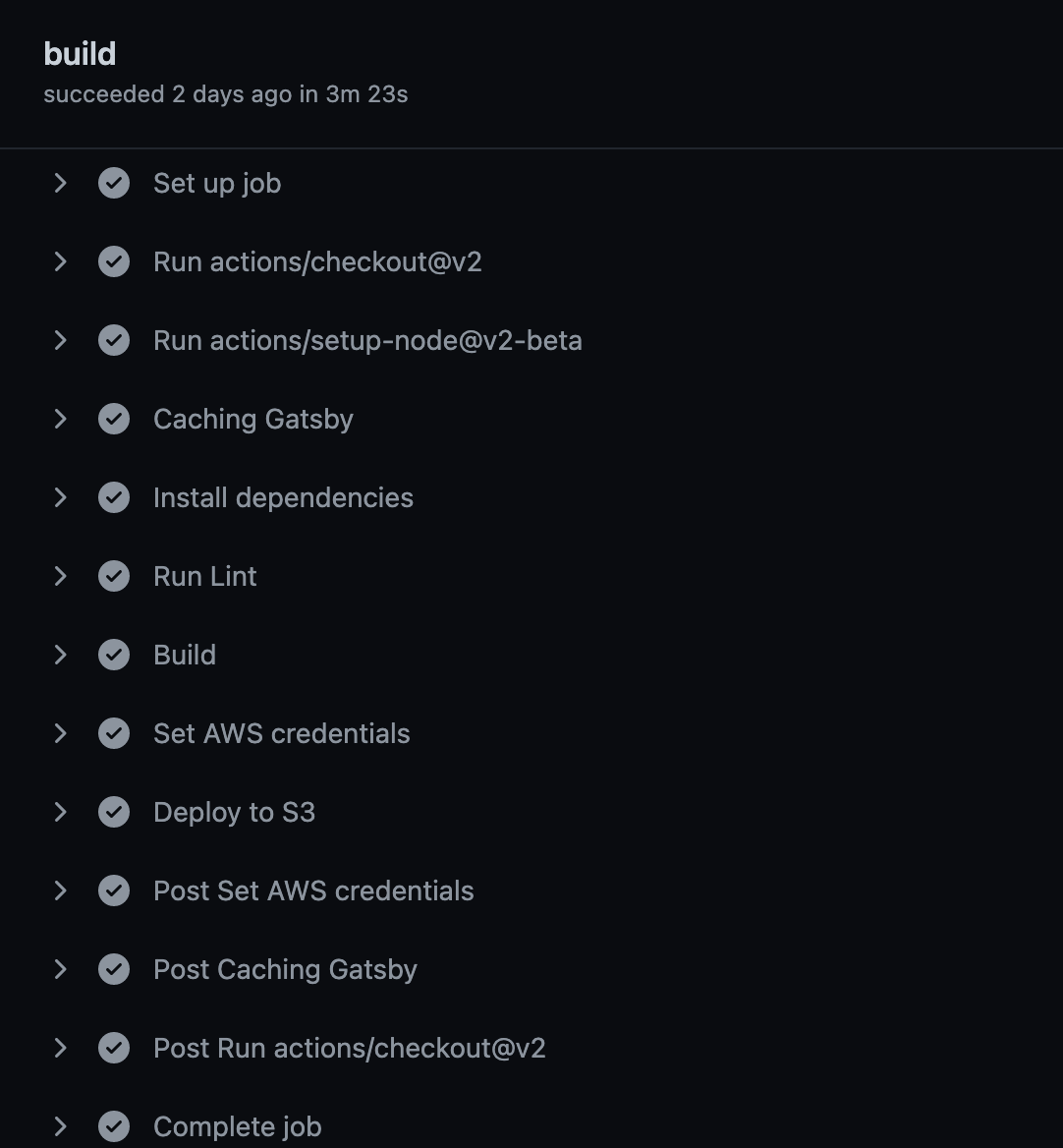 There you have it. Much simpler than setting up your own CI tool either locally or in the cloud.

This is a fairly simple example, although you can do a lot more with GitHub actions if you use docker or some of the action plugins.

If I wasn’t the only one contributing to this blog, I would also set up some of these steps to run on pull requests as well.

To do that I would set the on statement to run:

And then add an if statement to the AWS and Deploy Steps:

If you don’t have your own build server using GitHub Actions can be a great alternative. For public projects it is free and for private personal projects the 2,000 minutes is likely to be more than enough.

I have been using n8n for a couple of months now, and it has allowed me to automate so much of my daily workflow. These are some of the…
I have recently been looking into AWS Step Functions. For those not familiar with them, Step Functions are Amazon’s way of providing a state…
I use docker every day. All the applications I write at work or at home end up in docker containers. Most of the time though, I am only…
As you might have seen from my last few posts I have quite a lot running on my Raspberry Pi. I am currently using a Raspberry Pi 2 B which…
I wanted to put together my home build server using my Raspberry Pi. After looking at the options I picked Drone CI, it has a nice interface…
I use my Raspberry Pi as my own personal home server. Up until recently, I have been using nginx as a reverse proxy for my docker containers…
By the time you finish reading this article, you will know how to get your static websites up and running securely on AWS using Terraform…
I recently switched my website over from a standard Wordpress installation to a static site built with Gatsby.js and React. With Gatsby.js…
SHARE: