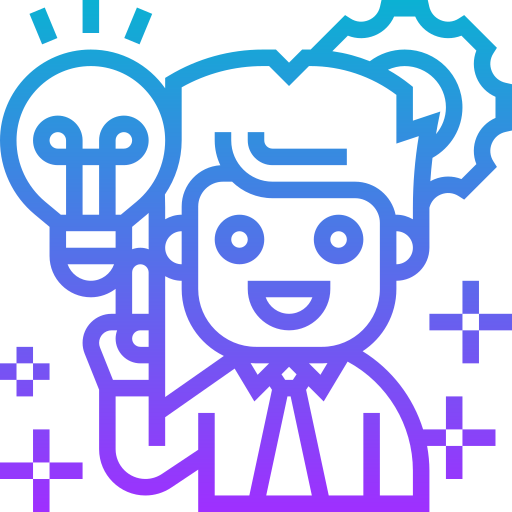 As an entrepreneur, I am always trying to find cost-effective ways to promote my business. I am no marketing expert, at least not yet, so a lot of it is just trial and error at this point. For my first attempt at paid advertising, I chose to boost a Facebook post to see what would happen.

Now if you follow other bloggers you may have heard of Melyssa Griffin she is an internet marketer and blogger who makes over $100,000 a month! She no longer shares her income reports but the ones she has posted up to the end of 2016 are still there.

I was looking at her December 2016 Report and noticed she paid a staggering $52,582 in Facebook Ads. Now, no one pays that much each month unless they are getting an even better ROI.

Attempt 1: What not to boost 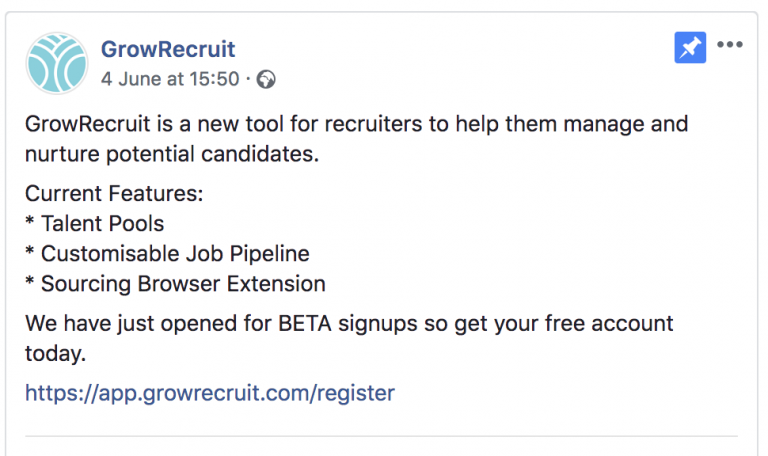 The post had a link directly to my signup page in the hope it might drive some traffic there. So I set up my target audience, entered my card details and tentatively waited for my ad to get reviewed.

About an hour later I got the dreaded message:

Your post is still published on your Page, but it is no longer boosted because it doesn’t follow Facebook’s Advertising Policies.

Not a great start but oh well let’s try again. After doing a bit of Googling it turns out Facebook doesn’t like promoted posts to look too much like an advert, as it spoils the user experience of the site.

So for my second attempt, I tried just a standard list post to see how it would perform.

Now content marketing is something I am going to spend a lot of time doing over the next 6 months as I try and get some traction for my startup. So I was going to be posting stuff anyway so why not start now.

I had already done research on what sort of posts attracted visitors by looking at other blogs in my niche. To get clicks however I needed a decent title.

I used CoSchedule’s Headline Analyser to come up with a decent headline. If you haven’t used it before it is a very cool free tool that gives your headline a ranking based on how well it thinks it will perform.

After about 10 mins of trying different things I came up with “5 Mistakes Unsuccessful Recruiters Make All the Time“. Which gave me a headline score of 73! 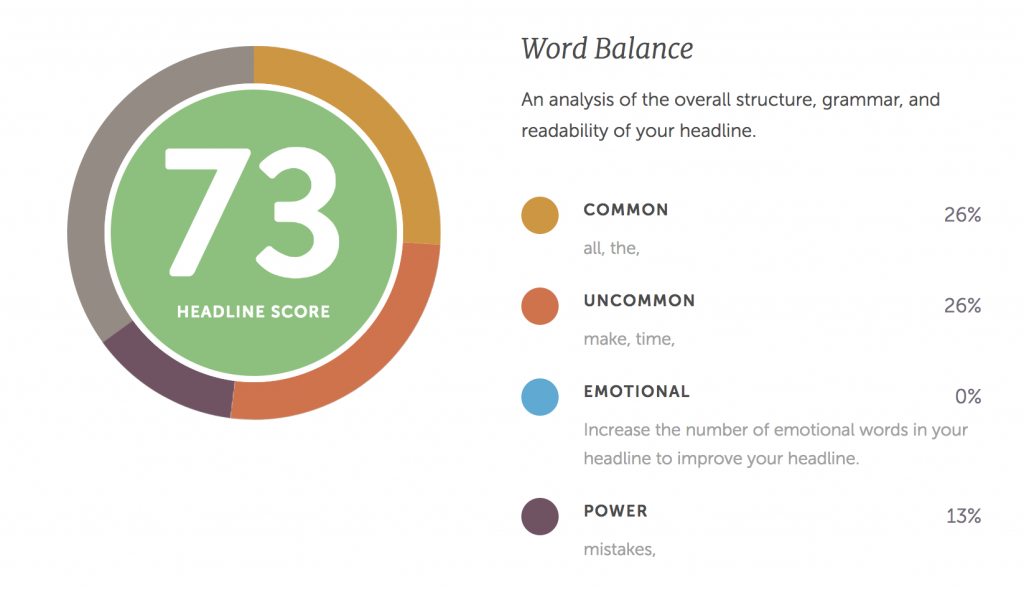 With the article written and published the next step was to post a link on my Facebook page and write up what was ultimately going to be my boosted post. 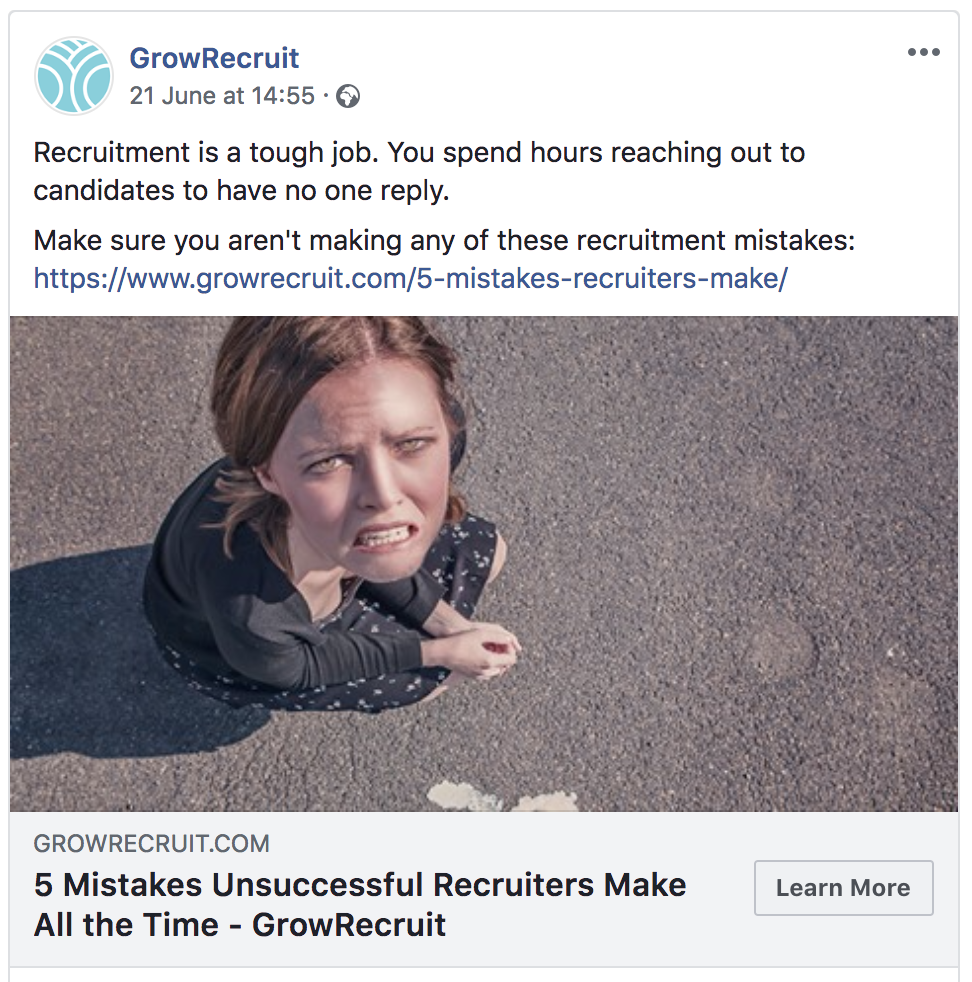 The great thing about Facebook Ads and the main reason I considered using them is that you can specify your target audience. Instead of sending your message out to thousands of random people you can send it to people in your niche who might actually be interested in your offer.

For my first Ad I wanted to try and make it as targeted as possible so I went with the following:

I ran the promotion for 6 days with a total budget of £20.

For just £20 my post was shown to 3,858 people and resulted in 150 clicks through to my website. Resulting in a 3.9% click through rate (CTR) which is probably about average if not on the low side for Facebook Ads.

The breakdown was as follows: 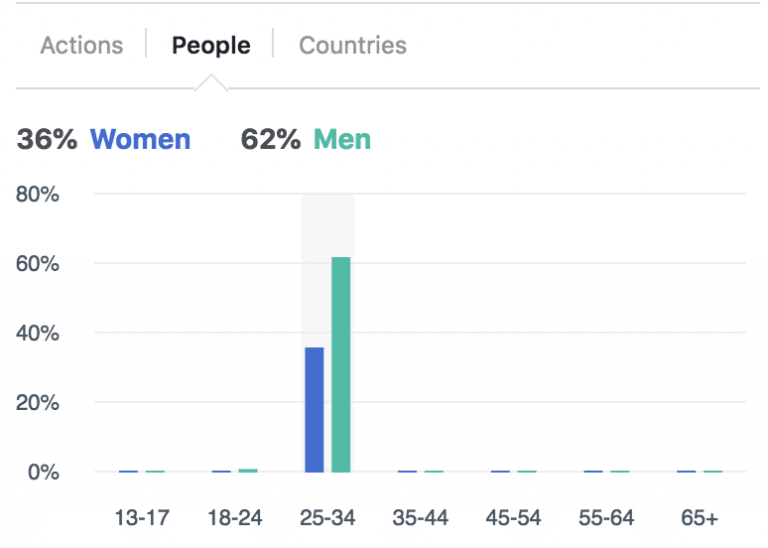 You will notice from the stats above that I also managed to get 2 comments. However, it seems that Facebook’s algorithm isn’t perfect, as based on the comments it clearly wasn’t shown to recruiters. I couldn’t see my selected interest on their Facebook profiles either.

For completeness, these were the comments I got on the post. Still, I guess some engagement is good right? 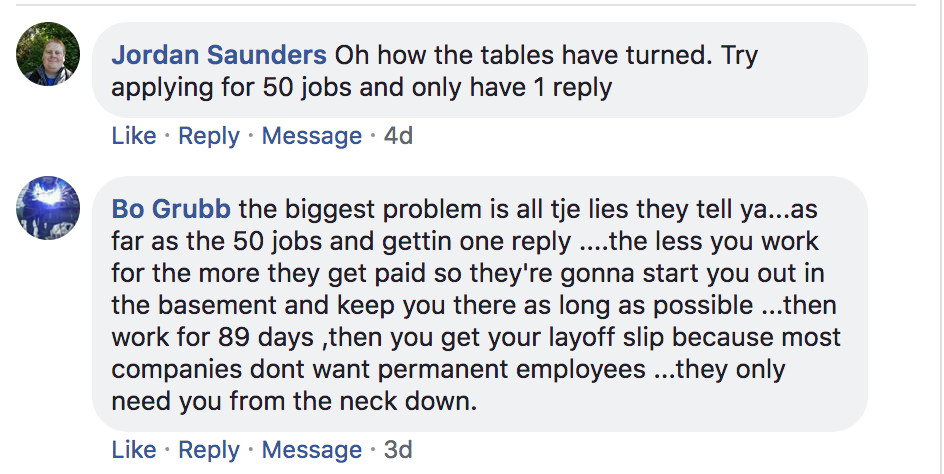 Obviously, all those clicks resulted in traffic on my site. Unfortunately, it didn’t convert into any sign-ups, but I think that is probably more down to my poor post choice and lack of a decent call to action (CTA) in my post.

If you are interested this is what those 150 clicks look like in Google Analytics over those 6 days: 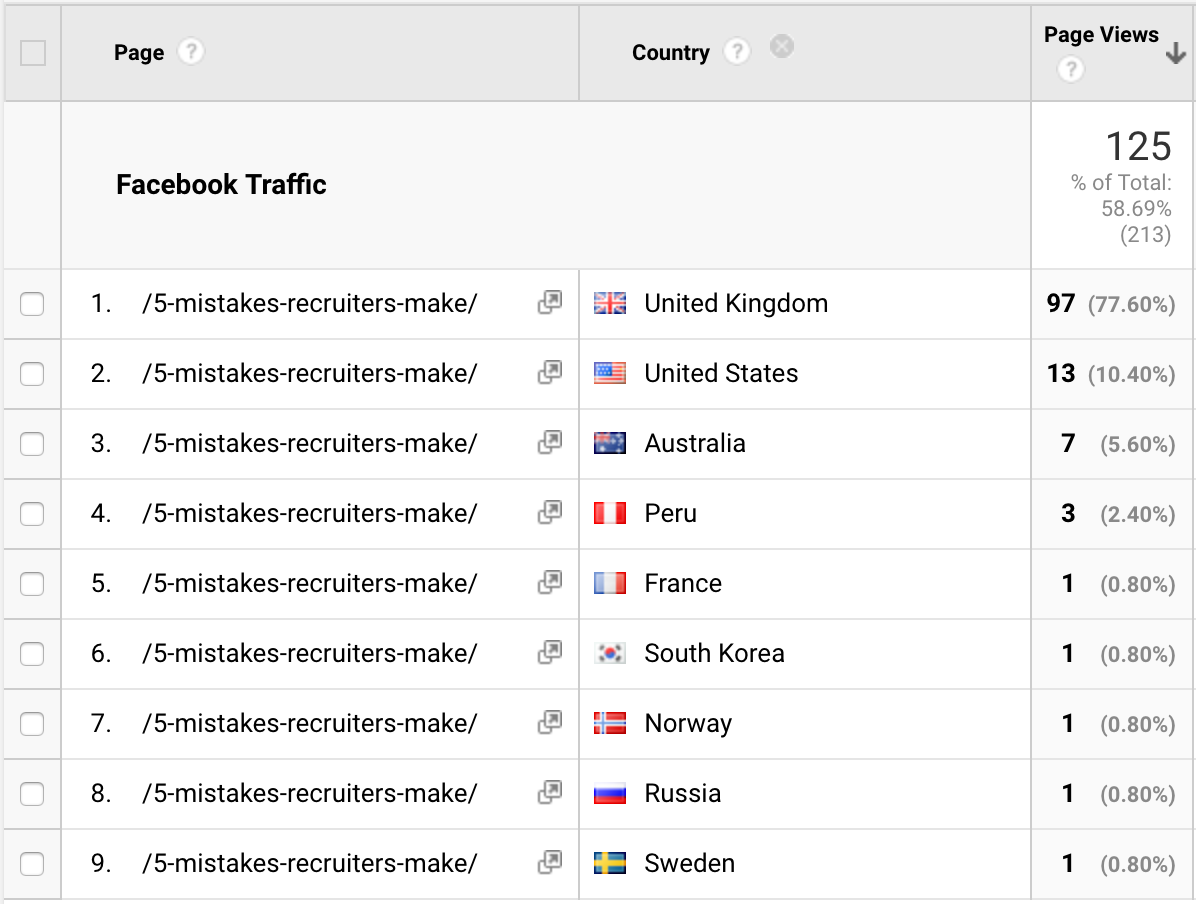 I seem to be missing 25 clicks. I am guessing whoever clicked the link didn’t wait long enough for the page to load. Also interesting is there are more than the 3 countries I selected.

Even though there was a severe lack of engagement and signups resulting from my £20 spend, I would still count this as a success. With better copy and a decent lead page on the other end, I think this could have the potential to bring in a lot of leads.

In future, I will be doing smaller tests and working out which Ads perform better before spending any more on Ads.

If this post was at all interesting or useful please let me know in the comments.

The last couple of years have been tough for many people. A mix of lockdowns and general anxiety has left many feeling burnt out and…
At the start of 2018, I made the bold (or stupid) move to quit my job and try my hand at building a startup. Before making this somewhat…
So far I have used the PlayDrone data to find out what the most downloaded free games, paid games and paid apps are. There are many useful…
In my last post I looked at the most popular paid games on Google Play. If you are not interested in making games but want to have a go at…
In my last post I looked at some of the most downloaded freemium games of all time, which are all guaranteed to be making a lot of money. As…
In my previous post a gave a few examples of apps that are making millions and billions a year. It comes as no surprise that to get to this…
Maybe like me you are thinking of dipping your toe into mobile development. You may have even started your journey on becoming the next app…
SHARE: